A disclaimer that today’s blog post will reference overused, but apt, adages as cases of COVID-19 in LA County have (finally) begun to decrease. Just as ‘what goes up, must come down’ is true in Physics, so too in Epidemiology. Every epidemic curve ultimately goes into decline in the same way that Surgeons will agree that ‘all bleeding stops, eventually.’

The chart of daily cases in the County shows us in sharp decline after reaching dizzying new case heights, dwarfing last Winter’s peak (when, by the way, Los Angeles was the global epicenter of COVID-19 cases and deaths). 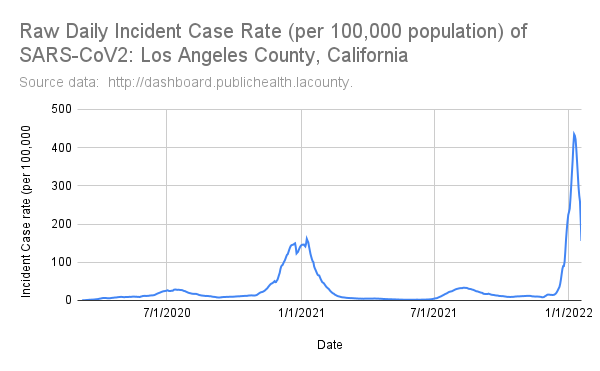 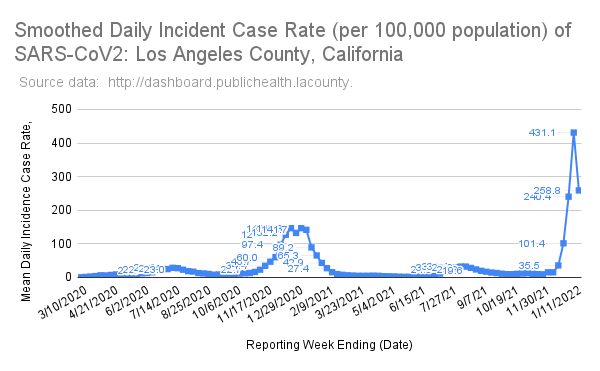 The epidemic curves shown above are classic textbook representations of what is terms a ‘propogated’ or ‘progressive source’ epidemic. What is hidden in the massive Omicron peak (better seen with last Winter’s outbreak) is that within the sharp rise in cases is a series of successively larger peaks. While Twitter may cheer the roll over and declination of this classic pattern, textbooks will tell you that propagated epidemic curves slow in one of two ways:

Any ideas on which one is at play here?

Once again, the LA County Health Department and the US Federal Government has intervened after the damage has been done. Sending a paltry 4 rapid antigen tests and requiring employers to provide high grade medical mask when Omicron has left the building will have little practical effect at this point.  In fact, cases in the County have gotten so out of control that prevalence estimates are no longer even realistic. According to calculations, .67.4% of County residents were infected with SARS-CoV-2 the week of January 11th. Obviously this is impossible, but instead represents an overestimate of positivity (test positivity that week was 22%) most likely stemming from the use of PCR testing in school-based surveillance. Rather than using more appropriate (and far cheaper) rapid antigen tests, school districts including LAUSD no doubt picked up recovered and non-infectious cases in their efforts. This incorrect surveillance approach not only derailed accurate estimates of Omicron’s impact but also had the effect of excluding kids from  school who should have otherwise been in attendance. 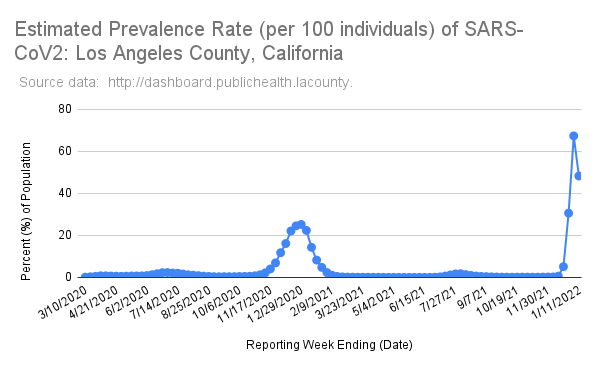 Testing rate soared as children returned to school to be greeted with nasopharyngeal swabs. 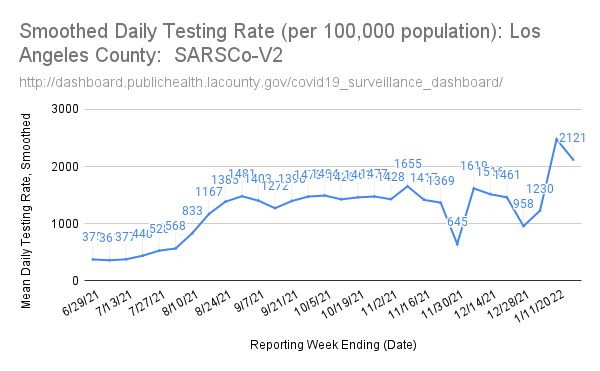 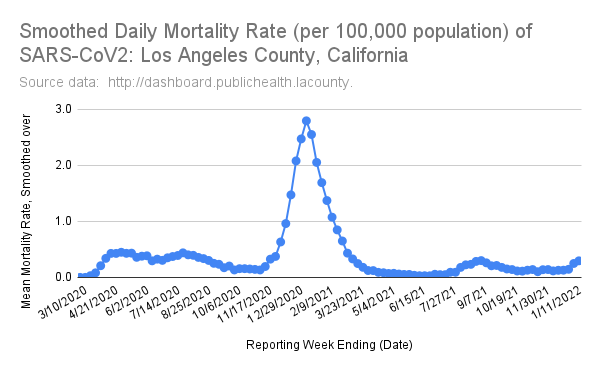 When plotting mortality rates against incidence case rates, the clear and consistent lag in mortality is seen across each successive wave. While we are currently at a far lower magnitude in terms of mortality rates, the adage still applies – more cases, more deaths. I would expect that deaths will continue to climb as we only just now have turned the Omicron corner. 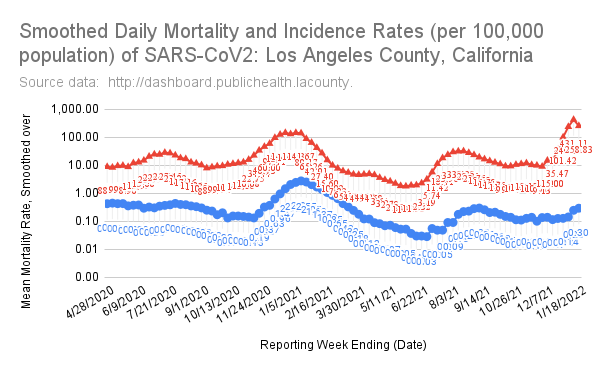 While it is a welcome relief to see cases come down (and this is true in our clinic as well as we are seeing fewer cases, fewer exposures and doing a lot less testing than we were at the beginning of the month), I find it hard to cheer the news. We didn’t really do anything as a community to affect this change – the virus simply ran out of susceptible hosts. Contact tracing efforts at the Health Department remain worse than ever. Cumulatively, LA County Health Department has performed contact tracing on 36.1% of COVID-19 cases. In the past week – 5.8%. To effectively intervene and contain a virus, a contact tracing completion percentage needs to be about 80-90%.

As we all know, ‘those who do not learn from history are doomed to repeat it’, a quick review of the epidemic curve will tell us what to expect. 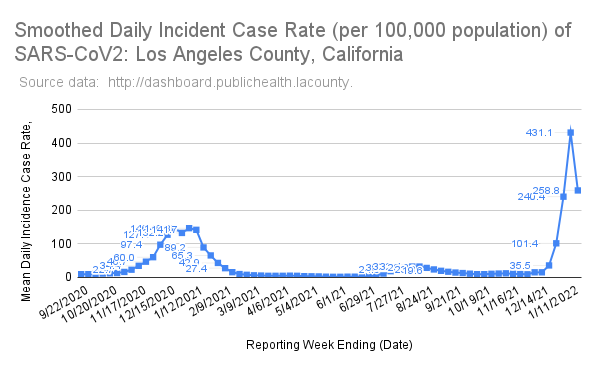 Last year’s Winter peak tailed off to a whisper by the final weeks of February and were followed by a quiet Spring. Cases rose again in early July fueled by the (then) novel Delta variant. We never really escaped the lengthy tail of Delta as case rates remained modestly elevated through the Fall until, once again, Thanksgiving travel led to case increases. Omicron’s emergence threw gasoline on this fire, ultimately squeezing Delta out of the picture. We obviously haven’t learned anything in 22 months – still battling ourselves to perform the basics of Public Health. Testing (antigen tests ran out, PCR is inappropriately used), Tracing (ha!) and Isolation (is it 5 days, 7 days, 10 days? Do I test? Do I not?).

Fundamentals are boring, but they are our way out of this endless loop of variant escape and a propagated epidemic curve. Or, as Pete Rose said, “It’s a round ball, it’s a round bat and you got to hit it square.”