I was hopeful that with widespread availability of vaccinations that I would be able to move onto other blog topics than COVID-19. However, I have had an increasing number of questions regarding the Delta variant  (B.1.617.2 first identified in India). To add a confusing wrinkle, the Los Angeles County Health Department is now “recommending” or “strongly recommending” (or even “urging” which is in the linked article title) that residents wear masks indoors – even if vaccinated (link: https://www.latimes.com/california/story/2021-06-28/as-delta-variant-spreads-l-a-county-recommends-everyone-mask-indoors).

The crux of the issue – probably best summarized by Jennifer Gould of the Associated Press:

“The L.A. County recommendation — which is not a mandate — in the nation’s most populous county does not match what the state government and the Centers for Disease Control and Prevention say, which is that vaccinated people in certain public indoor settings do not need to be masked.”

So why would the County make this recommendation?  Their justification is that the delta variant is more transmissible.This is, in fact, TRUE. The delta variant has primarily been linked to  a resurgence of COVID-19 in Nepal, southeast Asia and elsewhere. According to Public Health England, delta seems to be around 60% more transmissible than the already highly infectious Alpha variant (remember B.1.1.7? That’s now alpha) identified in the United Kingdom in late 2020.

Another justification is that the delta variant is “spreading rapidly” in Los Angeles. According to County Health officials, “in the week ending June 12, it comprised nearly half of all variants genetically sequenced.”

A third justification could be that the delta variant may be associated with more severe disease when compared to the Alpha variant.  In fact, Preliminary evidence from England and Scotland suggests that people infected with Delta are about twice as likely to end up in hospital, compared with those infected with Alpha. The County does not use this, however, as a rationale for indoors masking for vaccinated individuals.

Here is what is left out, however.  An excellent study by Public Health England (link: https://www.gov.uk/government/news/vaccines-highly-effective-against-b-1-617-2-variant-after-2-doses) has shown that 2 doses of the COVID-19 vaccines are highly effective against the Delta (B.1.617.2) variant.  Most germane to the United States,

“The Pfizer-BioNTech vaccine was 88% effective against symptomatic disease from the B.1.617.2 variant 2 weeks after the second dose, compared to 93% effectiveness against the B.1.1.7 variant”

Based on prior experience, we would reasonably expect that the Moderna 2 dose vaccination protocol would display similar efficacy to Pfizer-BioNTech and the Johnson & Johnson single dose vaccine somewhat less.

But let’s look at some actual data.  If the Delta variant comprised 50% of the cases in Los Angeles County by June 12th and is more transmissible, we should start to see an uptick in cases.  Figure 1 below shows the last 15 weeks of incident case rates in Los Angeles County (note: viral containment is defined as <1 new daily case per 100,000 population). 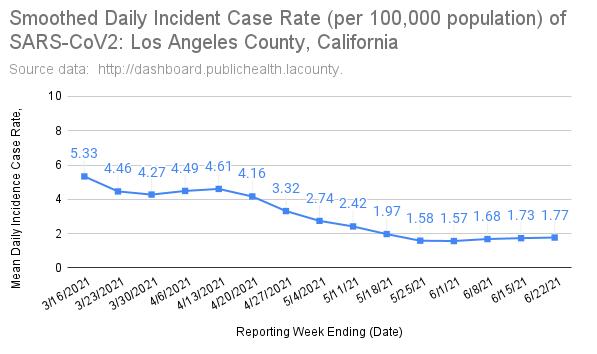 Currently we stand at 1.77 new daily cases per 100,000 population which is somewhat increased from the lowest rate seen the week ending 5/25/21 of 1.58 new daily cases per 100,000 population. But this is hardly emblematic of the exponential spread that characterizes COVID-19 when blazing out of control. Let’s refresh our memories of what happened after Thanksgiving when the County Health Department declined to mandate travel restrictions over the holiday (Figure 2 below). 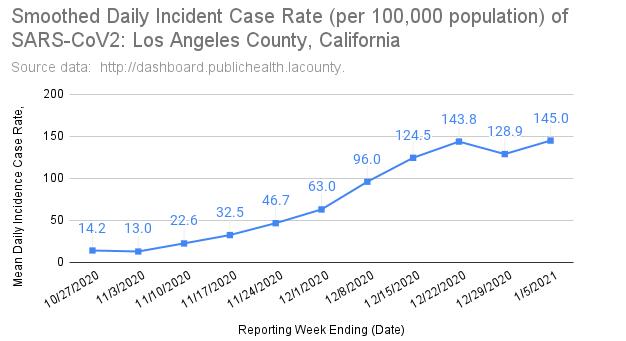 Exponential spread is characterized by the rapid rise in case rates.  As you can see from Figure 2, cases were increasing rapidly and steadily in November and December at orders of magnitude beyond what we are seeing currently.

There’s no harm in masking indoors but for those who have been fully inoculated with a two dose series, I fail to see the point – either at an individual or a collective level. For those who remain unvaccinated or partially vaccinated, (note only 4.5 million second doses have been given in Los Angeles County which has a population over 10 million), the Delta variant should be an impetus to get vaccinated. Note also that there are NO data on “natural immunity” and the Delta variant. While antibodies from COVID-19 infection appear to be durable and may be effective, nobody has studied their neutralizing effect vis-a-vis this variant. For those who remain unvaccinated or have chronic conditions that may render even a two dose vaccination series less effective or ineffective, an N95 mask is your best protection. 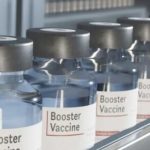