Well, it’s official.  Case numbers in Los Angeles on December 31st 2021 rose to new heights, exceeding the maximum number we experienced in the devastating outbreak that began in late 2020 and extended into 2021. During that time Los Angeles was the global epicenter of cases and deaths. The 168.48 new daily cases per 100,000 population recorded 12/31/2021 broke the previous high water mark of 161.14 on 1/8/2021 (Figure 1 below). No doubt these numbers will go far higher as people return to work and school this week. 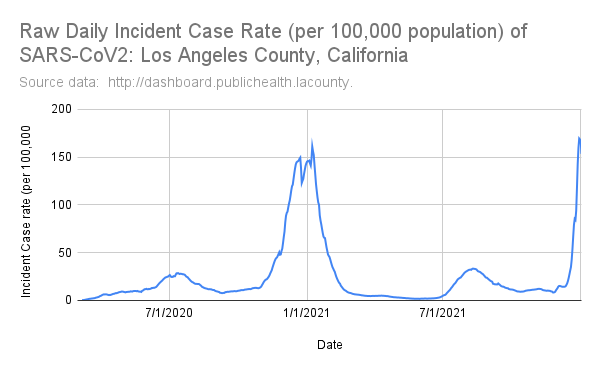 Graphing year over year (weekly data below which lag due to County reporting delays) shows the sharp upwards trajectory we are currently experiencing (Figure 2 below). 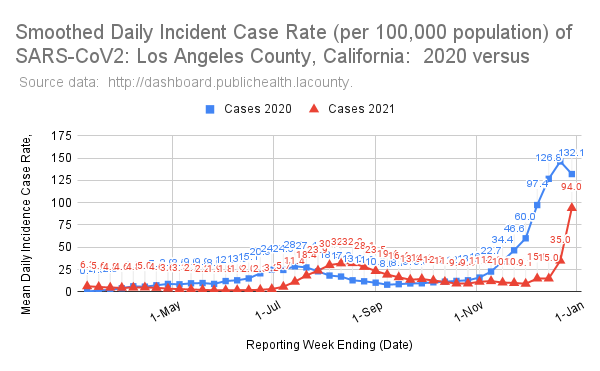 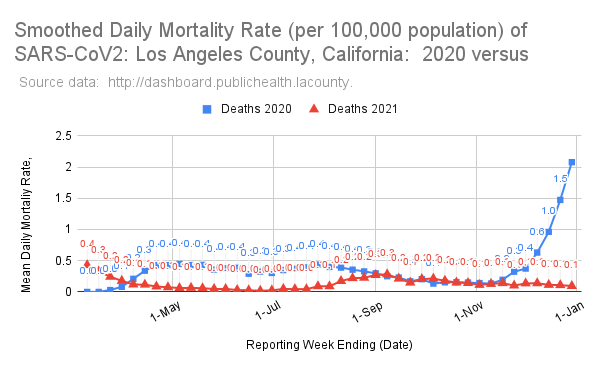 Hospitalizations do appear to be increasing, however.  Reviewing data from the State of California shows that currently in Los Angeles County there are 2,168 COVID-19 hospitalized patients. This is far fewer than last January’s (2020) maximum of 8.385 but a clear uptrend exists and even the 14 day average is beginning to have an upwards slope (link:  https://covid19.ca.gov/state-dashboard/#location-los_angeles). Hospitalization is, unsurprisingly, correlated with lack of vaccination wherein those without vaccination are 14.5 times more likely to be hospitalized than those with a complete vaccination series (note: not necessarily a booster).

So what are we dealing here with Omicron and what can we expect?

The first thing and perhaps most reassuring is that the emergence of Omicron is associated with an overall lower population mortality rate here in Los Angeles. To see this effect on a population scale so soon is astonishing. It is reasonable to conclude that intrinsically Omicron is less virulent than Delta and is now making significant inroads to becoming not simply the predominant but perhaps the only circulating variant.

Third – in terms of what we can expect – it is going to get worse. The question at this point is really how high can case numbers go? With schools in session and many of the largest districts performing in school testing (inexplicably occurring AFTER the kids return to school), we can expect to see numbers go way up in the next week or so. Testing rates in Los Angeles County are highly dependent on school being in session which can be seen in Figure 4 below – note the significant drop off in tests during Thanksgiving and Winter Holidays. 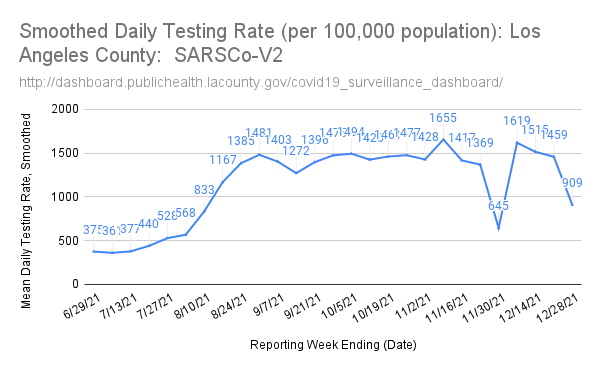 A couple of interesting patterns are emerging here in our clinic, the first being a ‘hopscotch’ pattern of Omicron infection. If you remember, early case reports from the Anime convention in NYC and the holiday party outbreak in Norway, essentially everybody was getting Omicron. Over 70% of those attending that holiday party (all fully vaccinated) ultimately became infected. But this is not at all the pattern we are seeing in our testing. Instead, within families who gathered for the holidays with somebody who ultimately tested positive for COVID-19, not all became infected despite essentially equivalent environmental exposure. Further, rapid antigen testing of adults who have had the booster return negative sooner (around Day #5) than among adolescents or younger patients who have not yet had the booster (around Day #7).

Generally illnesses have been mild, characterized primarily by congestion and a sore throat. Gone are the days of the loss of sense of taste and smell. Fever is rare, coughing is rarer still. In about 20% of cases we are seeing gastrointestinal symptoms. In short, Omicron appears to be acting more like a regular virus and less like COVID. Don’t get me wrong, it still has potential to be a very nasty illness – particularly among those who are unvaccinated or did not produce a robust immunologic response to the vaccine – but its virulence appears to be waning.

It’s going to be a mess out there for the next several weeks. People are going to continue to get infected.  Businesses, airlines, and other industries are going to be significantly disrupted as folks go into isolation and quarantine.

We have more than enough testing capacity in our clinic currently and understand from our suppliers that the current limitations in more general availability should lift mid January. We continue to run our curbside testing program and I, most definitely, am getting my steps in getting these tests performed.