Death is never comfortable to talk about, but as we approach 1 million US deaths from COVID-19 (now at 969,000), it is instructive to look at mortality due to SARS-CoV2 infection. Conceptually I break the pandemic into three distinct parts when considering COVID-19 mortality: pre-vaccination, widespread vaccine availability and vaccine plus early treatment.

Figure 1 below shows mortality rates by week in Los Angeles County from March 1st 2020 through the week ending January 12, 2021. Pfizer received vaccine approval in mid-December but, initially, rollout was for healthcare workers but by mid-January, those in higher risk groups began receiving the vaccine. Case rates fell between 0.3 and 0.4 daily deaths per 100,000 through the Spring and Summer, dropping to 0.1 in the Fall before rising sharply during our Winter 2020/2021 disastrous surge. It was during this surge that Los Angeles was the epicenter of world cases. 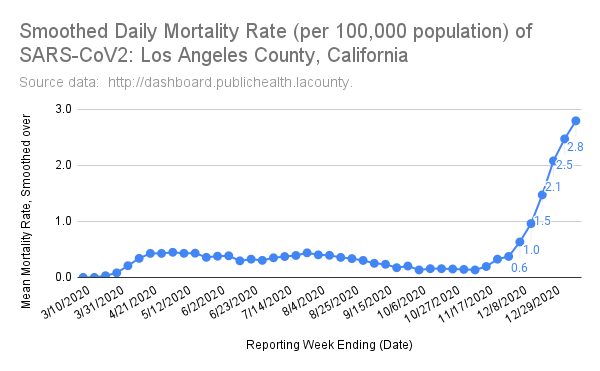 The second time period to consider was that during which vaccines were widely available but early outpatient therapeutics had not yet come to market. While the first biospecific treatments were approved in May of 2021, Paxlovid did not receive approval until December 2021. Given that many treatments were earmarked for more highly impacted areas (such as Florida, Texas and Georgia), many of these treatments were not widely available until October or November 2021 in Los Angeles. So I mark the termination of the second phase of the COVID-19 mortality pandemic as November 1st, 2021. The sharp decline and the massive effectiveness of vaccination in preventing death from SARS-CoV2 infection is clear even from a simple graphical representation of these data (Figure 2). 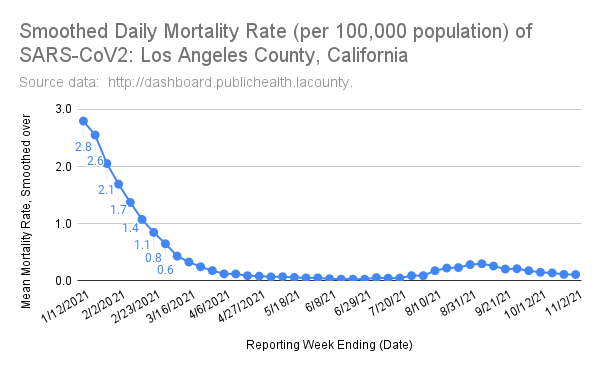 The last time period to consider is from early November 2021 until present day when the highly infectious Omicron variant led to a massive increase in cases. In Figure 3 below, the mortality rate in Los Angeles County peaked in early February at 0.8 daily deaths per 100,000 population. While this rate is far below that of the January 2021 peak (2.8 daily deaths per 100,000) it nevertheless demonstrates the significant population impact it had upon the health of the County. It is unclear how much impact therapeutics made in attenuating this mortality rate given that many monoclonal antibodies showed such a decreased efficacy that institutions largely stopped providing it. Paxlovid was quite difficult to find as well, especially in January and February. 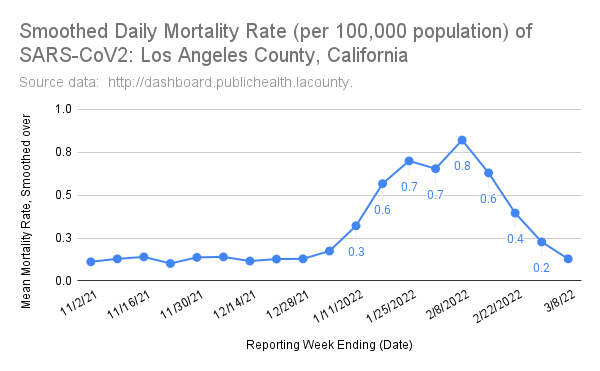 In all of the debate surrounding COVID-19 along with the impact and the effect of various mitigation strategies in protecting the public’s health – there is one aspect that has near universal agreement.  Vaccination is an effective tool in prevention of severe outcomes and death with SARS-CoV2 infection or breakthrough. While a variant such as Omicron that is highly transmissible can impact this protection at the population level (as can a variant like Delta that was associated with more severe disease, but was less transmissible), the highly effective and protective role of vaccination is seen convincingly across the graphs of the three phases of the pandemic.

While I am hopeful that early therapeutic intervention will further reduce future mortality rates, the relative lack of availability of Paxlovid and the decreasing efficacy of monoclonal antibodies made them less impactful vis-a-vis Omicron. Tools such as that developed by Rob Relya will allow for further transparency of their geographic allocation and deployment across the US.  Link: https://rrelyea.github.io/