There is increasing discussion across the US about the potential for a 4th wave of COVID-19 infections – but there is no indication of such occurring at this time in Los Angeles County.

Such an instance would occur due to the intersection of increasingly contagious variants and inadequate population immunity.  Because population immunity is a function of natural infection and vaccination, any such 4th surge in COVID-19 cases would be the direct result of a failed vaccine rollout.  Why?  Because, without exception, all known variants have been shown to be susceptible to the neutralizing antibodies provided by the three vaccines on the market – Pfizer, Moderna and Johnson & Johnson.

Earlier this week, published in Lancet, a Danish study estimated that the net effectiveness of natural COVID-19 infection against a subsequent re-infection was about 80% at six months.  However, among those over the age of 65 years, this rate of protection dropped to 47%. While Los Angeles experienced its greatest surge in early January (Figure 1), during which at least 25% of the population became infected, our chief defense against a 4th surge is a swift, effective and encompassing vaccination effort.

As a County, we are currently in our 10th straight week of decline.  Prevalence (the estimated proportion of individuals with active infection) in Los Angeles is now less than 1 in 1,000 (actually 0.98 per 1000 population for those keeping score at home) which is the lowest rate it has been in 52 weeks (Figure 1). 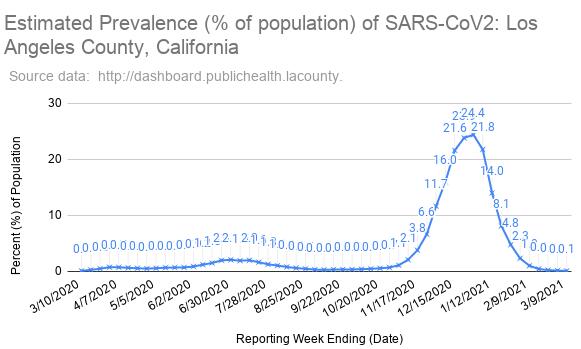 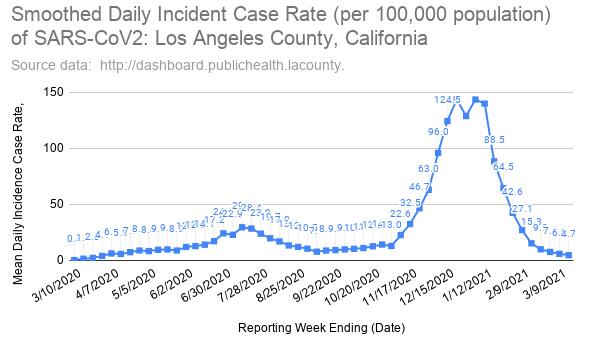 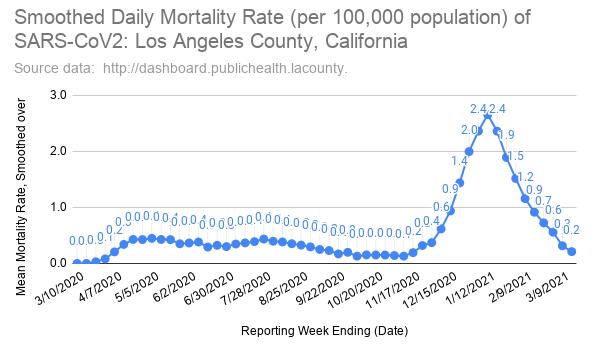 Yes testing rates are falling but so are positivity rates which are beneath 2% – a historic low. The most recent estimate for Rt (effective reproduction number) for Los Angeles County stands at 0.59 (source: http://metrics.covid19-analysis.org) indicating that each new COVID-19 case will lead to less than one additional case – meaning that on its current trajectory, COVID -19 will eventually disappear.

So, at this writing, there is no evidence that we are heading for a 4th wave here in Los Angeles.  Continued improvement in case numbers, however, will be dependent on a County government led vaccine rollout which, once again, will only focus on delivering second shots this week..

You may remember that back in January, Governor Newsom announced that Blue Shield of California (a health insurer who has contributed heavily to his campaign and inauguration committee – pointed out as a statement of fact, nothing more) would take charge of COVID-19 vaccine distribution in the State.  The stated goal was for Blue Shield to leverage their existing provider network to speed vaccine delivery and distribution.

Nothing of the sort has happened and, instead, only one California County (Kern) has signed a contract to work with Blue Shield.  Some (Santa Clara County) are in bold defiance of the move while others (San Diego) perhaps hope to fly under the radar by staying silent. Yesterday, the State Health Department stepped into the fray declaring that that counties would no longer retain control over how vaccines are distributed within their borders under the state’s new, centralized vaccination system. Instead, the spokesman said, the state would determine which hospitals, clinics and other groups get vaccine supply, relying on recommendations from Blue Shield.

“That’s a bit of a surprise,” Santa Clara County Executive Jeff Smith said in response “But that just proves the problem, that they’re relying upon an insurance company to make recommendations about distribution that are related to populations that we normally take care of. We know where the populations are, we know who the players are, we know who the vaccinators are, and they’re going to ask a private corporation to give them advice? It’s absurd.”

“Public health will continue to play a lead role because we are the local government entity tasked with vaccination in the county,” Public Health Director Barbara Ferrer told the county Board of Supervisors during a public meeting on Tuesday, March 9.

She went on to say, “I’m really comfortable with our provider network and the people we work with on the ground,” she said. “Those are the people I rely on the most when I think about how to solve problems of equity for a scarce good.”

My interactions with both the County and Blue Shield have been so disappointing that it has changed my answer to the most common question I get from patients: “when will you have the vaccine?”  My answer has gone from “probably March” to “maybe Summer” to now, “quite possibly never.” Despite our clinic having both State and CDC certification to store, administer and electronically report vaccines given, the County has steadfastly rebuffed our efforts to become involved. The response from Blue Shield provided little additional optimism:

“We are moving as quickly as we can to review and process all of the requests that we have received from many community based providers.  Due to the high level of interest, we anticipate processing requests for the next several weeks, and we will greatly appreciate your patience.”

These inequities are magnified when you turn to the over 65 population which has been primarily prioritized in these initial months. Whereas 47.8% and 44.6% of White and Asian seniors have received at least one dose of the vaccine, only 28.9% and 34.3% of African-American and Latinx seniors have received one dose (source: http://publichealth.lacounty.gov/media/coronavirus/vaccine/vaccine-dashboard.htm).

Santa Clara County which, apparently is too knowledgeable to take advice from any outside source, displays a similar magnitude of inequity.  It has only provided vaccines to 16.7% of its African-American residents and 10.1% of its Latinx residents.  Among White and Asian individuals these percentages are far higher:  21.8% and 23% respectively – both more than two fold as compared to Latinx (source: https://www.sccgov.org/sites/covid19/Pages/dashboard-vaccine-CAIR2.aspx)

So neither Los Angeles nor Santa Clara are doing well with equitably distributing vaccines but they don’t want help.  Here we are three months from FDA approval of the Pfizer/BioNTech vaccine and have two additional vaccines available – but only 12.4% of the Los Angeles County population has been vaccinated.  At least in Santa Clara, that percentage is higher at 21.4%.

Two weeks in a row of good news seems to be uncharted territory when it comes to COVID-19 cases in Los Angeles County.  Yet here we are.

For the week ending 3/1/2021 the County’s incidence rate dropped to 6.7 new daily cases per 100,000 (Figure 1).  From the State’s “Blueprint for a Safer Economy”, Los Angeles should have moved from the purple most restrictive tier (widespread) to red (substantial.  Link:  https://covid19.ca.gov/safer-economy/). Curiously, we did not. Test positivity rates are at 2.8% for the last 14 days and 2.6% for the last 7 days – both well within the red tier parameters. 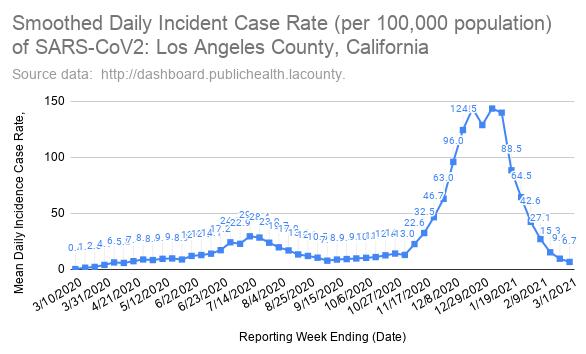 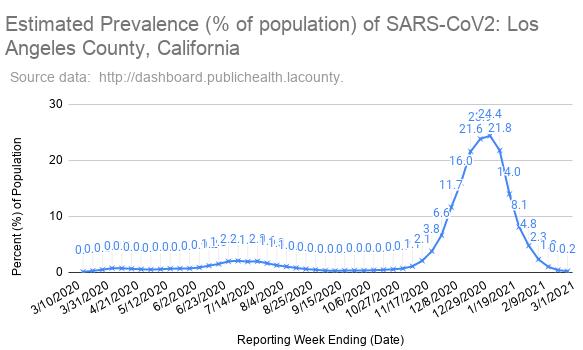 Mortality too (always a lagging indicator) has dropped to 0.4 daily deaths per 100,000 population which is a level last seen the first week of December (Figure 3). 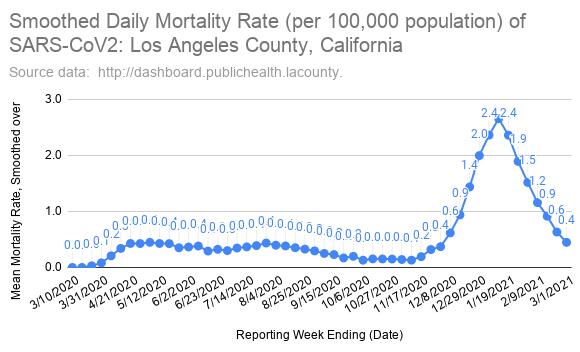 But, confusingly, headlines in the popular press tell a different story:

The mismatch between press headlines and our epidemiologic reality likely reflects a fear driven reaction from County officials.  As such, they have abandoned the tier system entirely (which may not be a bad thing). But by moving away from such, they no longer have a concrete metric by which they can consistently communicate risk to the general public. I first saw evidence of this abandonment when the December/January surge really took hold and Governor Newsom began using ICU capacity as a metric for reopening.  I think that occurred because the incident case numbers were of such an enormous magnitude that it rendered the tier system moot.

Why might it not be such a bad thing to move away from the tier system? Well, simply stated, California’s tier system is neither tied to actual data nor coupled with any public health initiatives. A better metric is found in the Harvard / Brown Global Health Initiative (link: https://globalepidemics.org/key-metrics-for-covid-suppression/) which suggests that a rate “on the path to containment” is a rate less than 1 new daily case per 100,000 population. Even at our current rate of 6.7 we are still experiencing significant community spread – so rigorous test and trace programs should be in place.

The fact is that we are getting better and only 2 per 1000 individuals in the county are currently infected with COVID-19.  Of course we need to avoid Spring Break travel and continue with risk mitigation efforts – but why? Because our goal should be to drive that incidence rate below 1.

Contact tracing in the county is improving but is still abysmal – in the past 7 days 51.2% of cases have completed a tracing interview, as compared to 44.6% cumulatively (link: https://globalepidemics.org/key-metrics-for-covid-suppression/).  But to be truly effective, the Health Department needs to have about a 90% completion rate. I have little confidence that they will achieve this goal, given that they have made themselves responsible for the entirety of the vaccine rollout rather than distributing the load. An already overworked, underfunded and now likely burnt out group is unlikely to do two things well. They should ask for help.

So where are we at?  Well we’ve had two weeks of improvement.  Cases haven’t been this low since April 14th, 2020. But we aren’t there yet – we need to be aiming for even lower incidence case rates and our County Health Department needs to work harder than ever to get there.

Yesterday Los Angeles County reported fewer than 1,000 new daily cases and a 7 day average of 3% test positivity – both significant and encouraging signs of improvement.  On the test positivity rate, Dr. Barbara Ferrer, County Public Health Director commented, “That’s actually the lowest its ever been since we’ve been offering testing in the community.”  (link:  https://ktla.com/news/local-news/l-a-county-says-rate-of-positive-covid-19-tests-is-lowest-its-ever-been/)

And she is right – at the outset of the pandemic, test positivity rates were in the 9-12% range and even in the lull of August and September rates hovered between 3-5%.

While the test positivity rate is but one metric to follow, I prefer to look at prevalence rates which represents the percentage of the population with the infection at a given point in time. It is calculated as a function of the test positivity rate and the new case rate and, because of the nature of the time between infection and detection of a new case, is about two weeks delayed.  Nevertheless, the current prevalence rate is at 0.4% down significantly from the 1/5/2021 peak of 24.4% (Figure 1).  That prevalence rate is truly mind boggling – of 100 individuals in the County, 24.4% had the infection at that time. 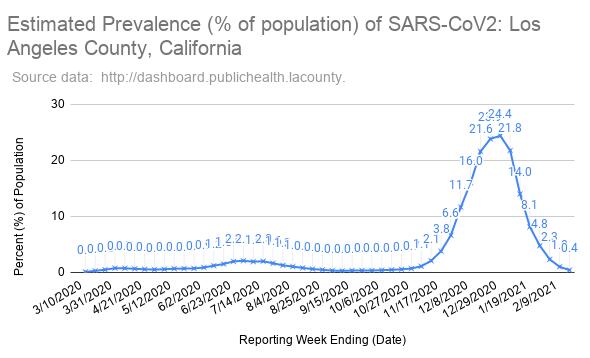 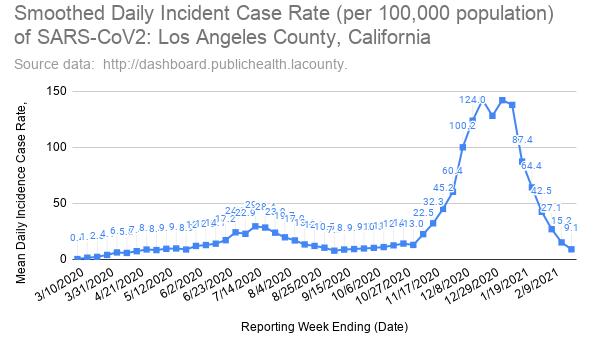 Mortality rates however are falling more slowly than case rates and remain 5-6 times higher than rates seen in September/October (Figure 3). This is not unexpected given that these rates have an inherent lag. 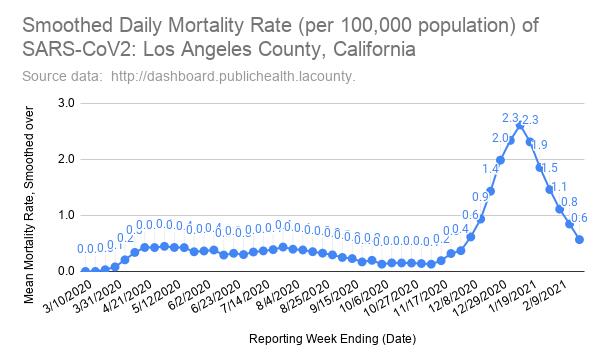 Ideally, we would like to see the new daily case rate continue to drop, preferably to below 1 to be on track for containment.  This, according to the Harvard’s Global Health Initiative (link: https://globalepidemics.org/key-metrics-for-covid-suppression/).  Nevertheless, a rate from 1-9 moves us from “accelerated spread” (stay-at-home orders recommended) to community spread (rigorous test and trace recommended).  This is all welcome news after a trying three months.