Recent press reports have suggested that the UK could be heading into a fall COVID-19 wave with the United States not far behind (link: https://www.cnn.com/2022/09/27/health/uk-fall-wave-covid-us). It made me curious that this statement, and subsequent narrative, was accepted as a simple truism – with the first question being, is this in fact the case?

There is some precedent for this East to West movement. Influenza virus in the United States typically begins on the East Coast and moves to the West Coast. Here in Los Angeles, we tend to see a peak in flu cases in the last week of December, although there are certainly cases beforehand and afterwards.

The graph below shows case rates in the UK and the US.  There are clear overlaps corresponding to successive waves fueled by distinct variants.

With the first cases reported in March of 2020 in both countries, mitigation efforts kept cases rates low (relative as compared to the massive Omicron outbreak) until a clear January 2021 peak.  While there was not much genetic epidemiology being done at that time, the alpha variant was seen in March 2021 in 97% of UK cases and 15% of US cases. Although the UK had a more sharp peak than the US, it is clear that case rates in that instance accelerated before the UK.

The next clear rise in cases occurred in the summer of 2021 – fueled by the Delta variant.  In this instance the UK did take the lead with cases peaking the week of July 21st while the US topped out September 5th. Delta also began circulating first in the UK with 53.5% of cases in May being due to the variant as compared to 3.9% in the US.  By August 31st, 99.95% of cases in the UK and 99.44% of cases in the US were due to Delta.

The next big surge was Omicron, with the UK again taking the lead. Cases began to rise in the UK in late October and peaked the week of January 5th. The US had cases rising late November with a peak the week of January 14th. But this isn’t quite as simple (but still follows a pattern of the UK taking the lead) as one might think when considering the genetic epidemiology.

So what really occurred was a surge fueled by a mix of Delta and Omicron (BA.1) with the latter supplanting Delta as the primary circulating variant. Omicron took hold in the UK before the US, however.

Dr. Tim Spector, professor of genetic epidemiology at Kings College London says, “Generally, what happens in the UK is reflected about a month later in the US.” Is this true?  Well sort of. It was not true for the Alpha variant, was most certainly true for Delta and again for Omicron. Interestingly, the distribution of BA.1, BA.2 and BA.4 has varied significantly during 2022 leading to a more short term trend where the US and UK are quite out of phase (Figure below). 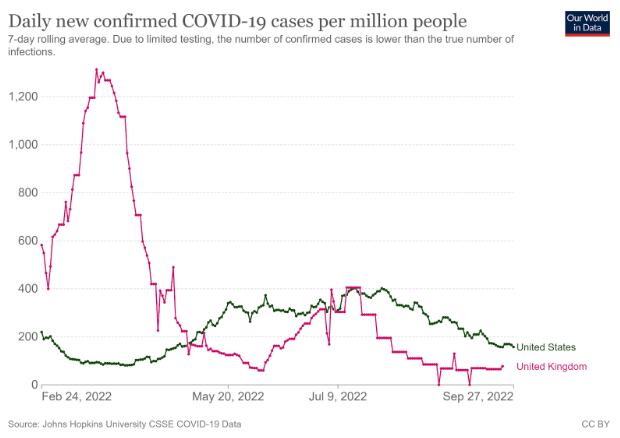 Spector runs a study of about 500,000 individuals which uses an app to let people in the UK and US report their daily symptoms and record results of home antigen testing results. He states: “Our current data is definitely showing this is the beginning of the next wave,” Spector said.

A brief look today at the current incidence and prevalence of COVID-19 cases in Los Angeles County.

Incidence is defined as the number of new cases in the population over a specified period of time. In the calculations below we present a daily rate per 100,000 population (averaged over 7 days to smooth out any reporting delays, such as over weekends and holidays). While we generally expect the start of school to carry with it an increase in transmission risk, this is not being seen at the population level. The graph begins in November and clearly shows the Omicron peak of Winter 2021/2022 along with the slow rise of summer cases that can be attributed to BA.5. 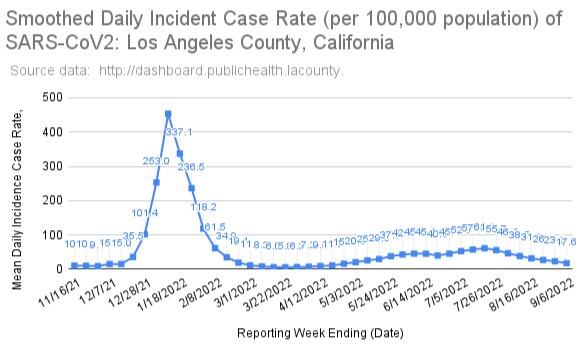 Prevalence rates are also declining in the County. Prevalence is defined as the number of active cases (both new and pre-existing) in a population over a defined time period. Here we estimate the proportion of the population with COVID-19 infection over a one week period. This is currently at 1.4% which is the lowest it has been since the week ending May 24th of this year. We calculate prevalence as a function of test positivity. 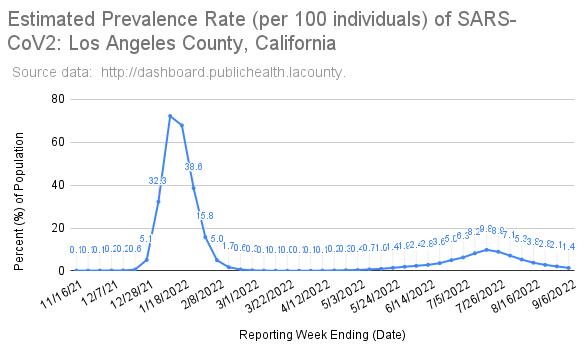 What is in the new boosters? Is there any difference between the Pfizer and Moderna formulations?

Both new vaccines consist of equal portions of mRNA directed against the ancestral 2020 strain of the virus and mRNA directed against the newer Omicron BA.4 and BA.5 variants. The BA.5 is the primary variant that is circulating currently at 87.5% of samples studied.  BA.4 is far less frequently seen at 2.2% (link: https://covid.cdc.gov/covid-data-tracker/#variant-proportions). The Pfizer product may be used by adolescents (age, ≥12) and adults; the Moderna product may be used only by adults (age, ≥18).

Are there any studies in humans to support the use of this BA.4/BA.5 bivalent booster?

No – there are no clinical studies as yet supporting its use.  Animal and limited human studies have confirmed excellent antibody production against both ancestral virus and variant strains but there is no information regarding its efficacy. Canada, the UK, and the European Union have approved earlier bivalent boosters that target Omicron variant BA.1. Neither the Pfizer nor the Moderna BA.4/BA.5 bivalent booster that was authorized by the U.S. FDA is in use elsewhere in the world.

What happened to the old booster? Do I need to ask specifically for the new booster so I don’t get the old one?

The original Pfizer and Moderna monovalent mRNA COVID-19 vaccines are no longer authorized for use as boosters in the U.S. for adolescents (age, ≥12) and adults. Only children (age, ≤11 years) who received a primary vaccination with a monovalent product can receive a dose of the Pfizer monovalent vaccine as a booster. For everyone else, the new bivalent vaccines are the only boosting options so there is no need to ask for a specific booster.

How long should I wait from my last booster or primary series before getting this new one?

Both new vaccines are intended for use at least 2 months after a previous vaccination (whether a primary series or a first or second booster). As with prior boosters, the general recommendation for those that have had a recent community acquired infection is to wait at least 3 months before boosting after infection.

If I decide to take the new booster, when should I receive it?

This is an individual choice and has a number of factors to consider but waiting is a reasonable choice at this juncture. Firstly, for those concerned about the lack of human safety and efficacy data, it may feel more comfortable to simply wait until those data become available. Secondly, prevalence rates here in Los Angeles have been decreasing steadily since a mid-July peak making coming into contact less likely at the population level (Figure 1 below) so delaying vaccination makes sense from that standpoint as well. 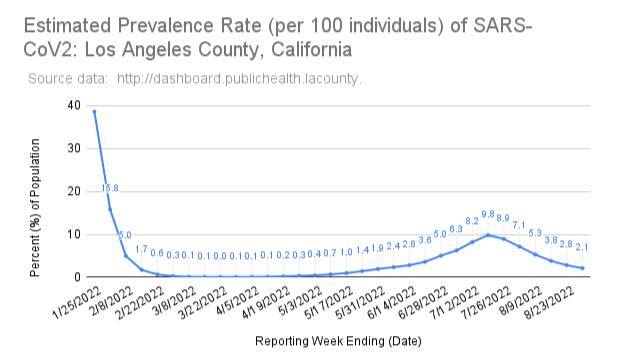 Patients planning to attend a high-risk event or who are traveling in the fall might decide to get a booster a few weeks beforehand (generally two weeks before departure is about the latest one should wait). Others might prefer to wait until early winter in anticipation of the cold-weather surge in respiratory infections including COVID (we covered COVID seasonality in a post earlier this month). This latter approach fits too with the CDC’s seasonal guidance wherein they are recommending COVID booster and flu shots together (link: https://emergency.cdc.gov/coca/calls/2022/callinfo_090822.asp).

The latest bivalent boosters began shipping over the Labor Day weekend and have now become available in local pharmacies. These are termed ‘bivalent’ as they contain two messenger RNA (mRNA) components of the SARS-CoV-2 virus – one from the original (ancestral) strain and the other a common sequence between the BA.4 and BA.5 sublineages of the Omicron variant. The artist formerly known as ‘the booster’ (which was monovalent) containing only the original strain has been taken off the market entirely and is no longer available. In this way, there will be no confusion about which booster to give to a patient, as only one has approval currently.

The timing of the bivalent booster shipping coincides closely and not coincidentally with seasonal influenza shots. We received our annual flu shots in the office about two weeks ago and have been dispensing them to patients already. It is a not so subtle nod to the seasonality of COVID-19. White House COVID-19 Response Coordinator Dr. Ashish Jha suggested that the bivalent booster could be bundled with seasonal flu shots saying (somewhat cumbersomely) “I really believe this is why God gave us two arms – one for the flu shot and the other for the COVID shot.”

Despite Dr. Jha’s clear misconception about the intelligent design of two arms (which were an obvious evolutionary pressure to allow for the  crossover dribble) – his framing is similar to the advice I have been giving patients about the timing of the bivalent booster. The overall goal being established protection by the Thanksgiving holidays, which is when seasonal respiratory viruses begin to spread in earnest – fueled by travel, family gathering and increased time indoors. Typically I recommend that flu shots be delivered by the end of October although we continue to vaccinate patients well into January (particularly if we have a later season surge).

There is clear evidence of a seasonal distribution of COVID-19. Below is a graph of prevalence (percentage rate of cases per 100 population) by week for Los Angeles County. There are three lines: 2020 (Blue), 2021 (Red), 2022 (Yellow) 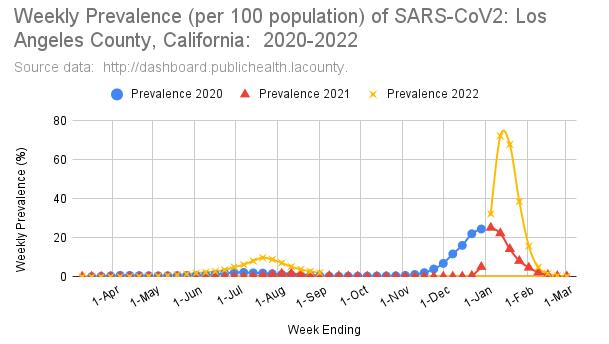 Looking at the graph it is clear that there are low seasons: March to June (all years although remember in 2020 we were ‘flattening the curve’ and in 2021 we still had Spring mask mandates) and September to November (which is interesting because there is a lot of fretting that goes on with the opening of school in the Fall).

Summer 2022 showed a clear rise in cases but the obvious seasonality begins mid to late November (2020 especially), peaking mid January (Omicron in yellow was indeed everywhere in 2022) before falling rather rapidly by early February.

So the rollout of the updated COVID-19 boosters targeting the BA.4 and BA.5 subvariants are indeed meant to head off a 2022/2023 winter surge but also give us a sense of how the CDC is shifting our pandemic approach to a more predictive rather than reactive response.

Dr. Fauci echoed this sentiment in classic Fauci speak: “It is becoming increasingly clear that—looking forward with the COVID-19 pandemic, in the absence of a dramatically different variant—we likely are moving towards a path with a vaccination cadence similar to that of the annual influenza vaccine, with annual, updated COVID-19 shots matched to the currently circulating strains for most of the population.”