Three days ago, while we were all enjoying a return to “normal” Thanksgiving, the World Health Organization designated a new variant of concern (B.1.1.529), which they named Omicron. The variant was first reported to WHO from South Africa on 24 November 2021. About 24% of the population of South Africa is considered fully vaccinated.

The epidemiological situation in South Africa has been characterized by three distinct peaks in reported cases as seen in the graph below. 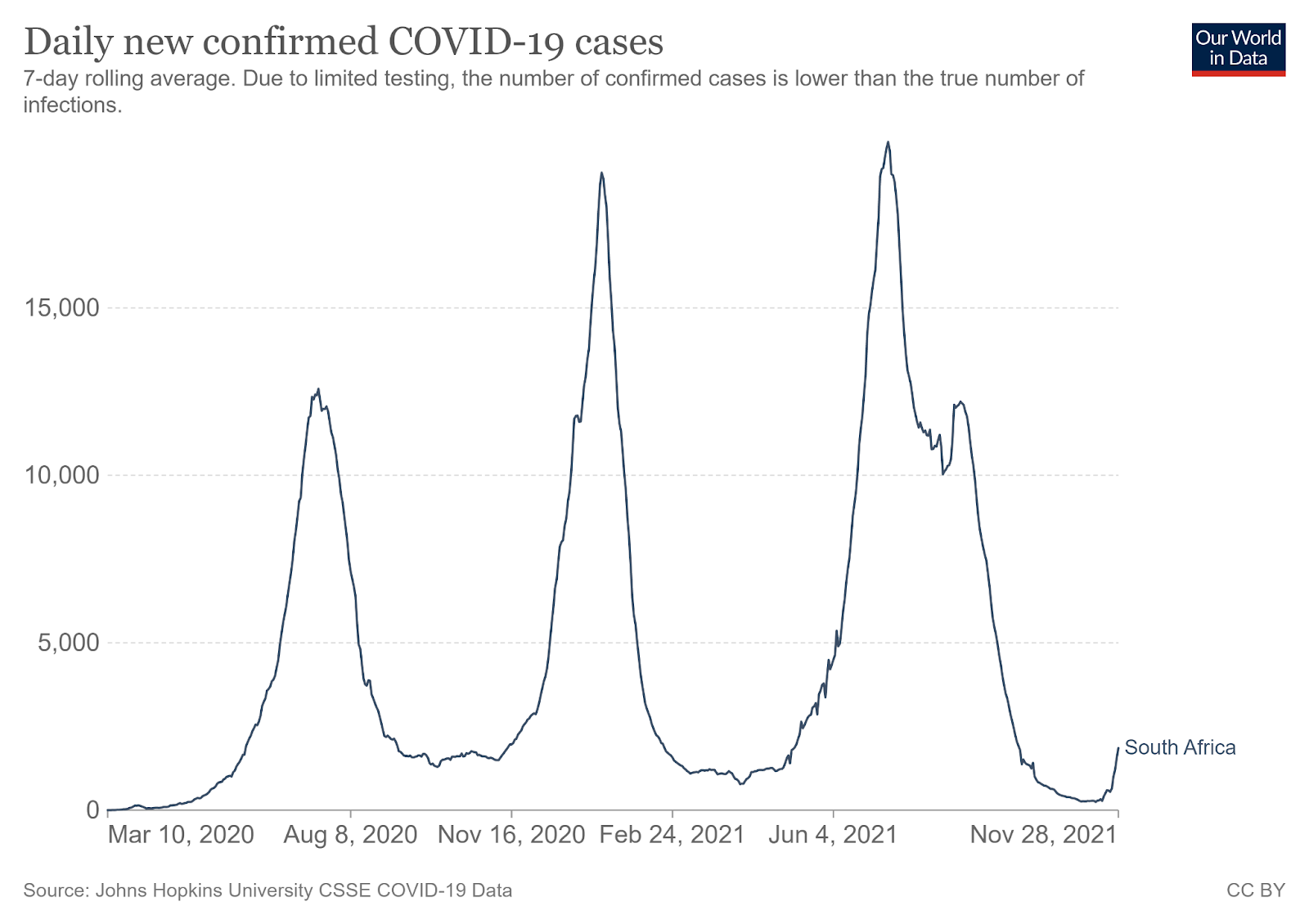 The most recent peak (June through September 2021) latest of which was predominantly the Delta variant but then dropped below previously seen between peak baseline levels. You can see from the graph above that infections though have increased over the past several weeks. The first known confirmed B.1.1.529 infection was from a specimen collected on 9 November 2021.

So why is this particular variant concerning?  Primarily because it has a large number of mutations any one of which can confer either an increased risk of transmissibility, severe disease or death.   , some of which are concerning. The number of cases of this variant appears to be increasing in almost all provinces in South Africa and has been detected at faster rates than previous surges in infection (although this finding may simply reflect an increased availability and accessibility of testing).

Multiple countries have already reported the presence of the variant, including a case in Belgium with no known travel history to South Africa (indicating community-based spread, link:

and, as of this morning, in Canada

Omicron, while having concerning features, isn’t really a huge unknown as we have had successive waves of COVID-19 allowing us to refine our public health and personal response. So here are the big questions, point by point.

Transmissibility: It is not yet clear whether Omicron is more transmissible (e.g., more easily spread from person to person) compared to other variants, including Delta. Although I would be hard pressed to imagine a variant more transmissible than delta. Travel bans make little sense at this point, given its likely wide detection only 5 days after being reported to the WHO. How do we cut down on transmissibility?  Increasing ventilation, participating in outdoor activities over indoor ones (difficult as the weather turns colder), wearing a mask indoors (preferably an N95 which are now widely available), washing your hands, and covering your sneeze/cough.  Oh and staying home from work when you are sick!

Severity of disease: This is probably the most important feature – and it is not yet clear whether infection with Omicron causes more severe disease compared to infections with other variants, including Delta. Preliminary data suggests that there are increasing rates of hospitalization in South Africa, but this may be due to increasing overall numbers of people becoming infected, rather than a result of specific infection with Omicron. There is currently no information to suggest that symptoms associated with Omicron are different from those from other variants.

Effectiveness of prior SARS-CoV-2 infection: This is a big question mark for Omicron and for other variants as well. Those who follow my blog know that I am not a big proponent of community-acquired infection as a pathway to immunity given the risks of morbidity/mortality and long term effects from infection.

Effectiveness of vaccines: This question goes hand in hand with the severity of disease topic above. Vaccines remain critical to reducing severe disease, hospitalization, ICU admission and death, including against the currently dominant circulating variant, Delta. Current vaccines remain effective against severe disease and death and should be an impetus towards

The graph below shows the steep drop off in vaccination doses administered in South Africa over the past several months despite 75% of the country remaining unvaccinated. This is a trend that needs to be reversed. 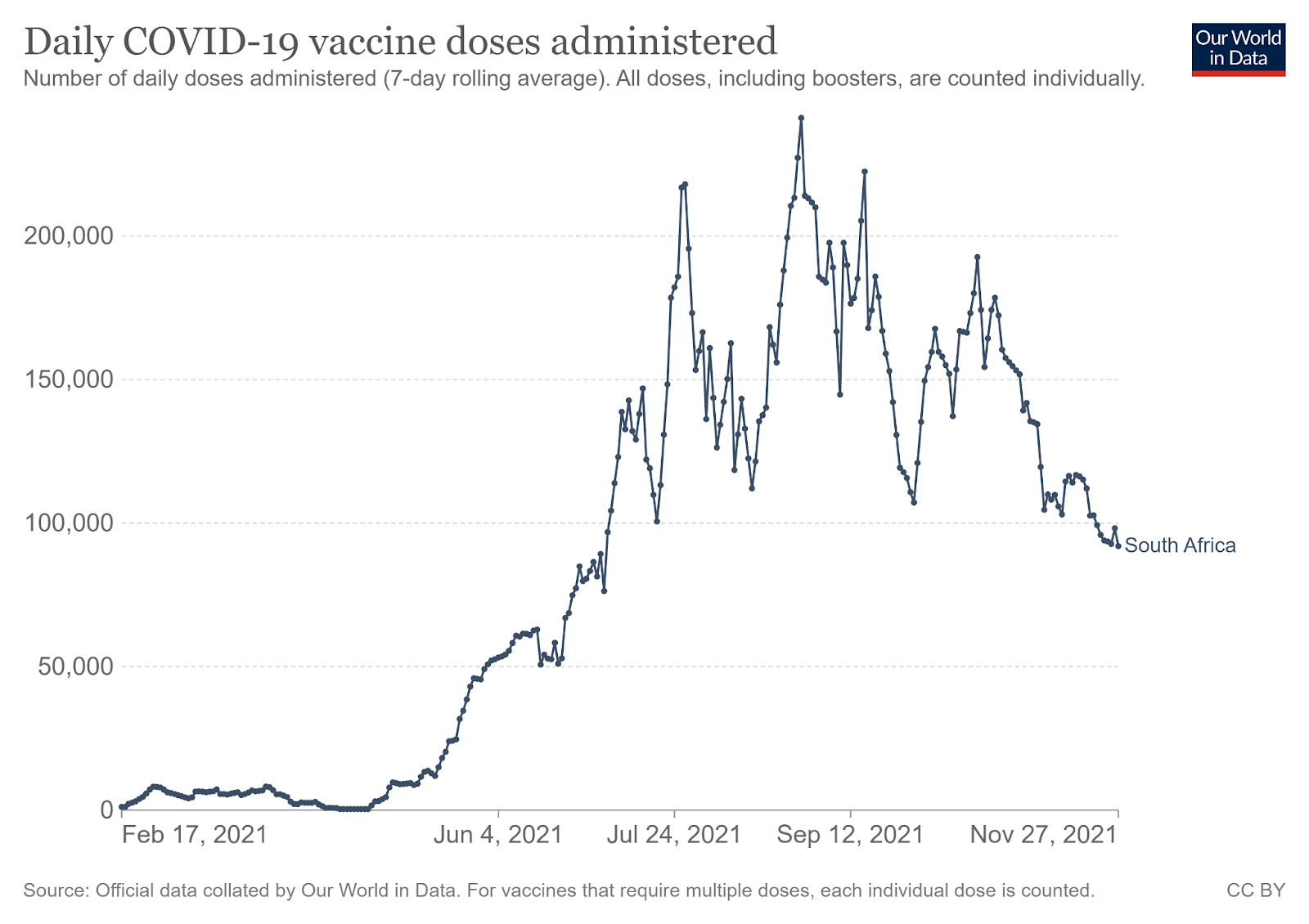 The United States isn’t doing much better, with a sharp decline in vaccines given over the last week (due to the Thanksgiving Holiday) and much of the slow rise from October representing booster doses.  Only 58% of the US population has received two doses of the vaccine. 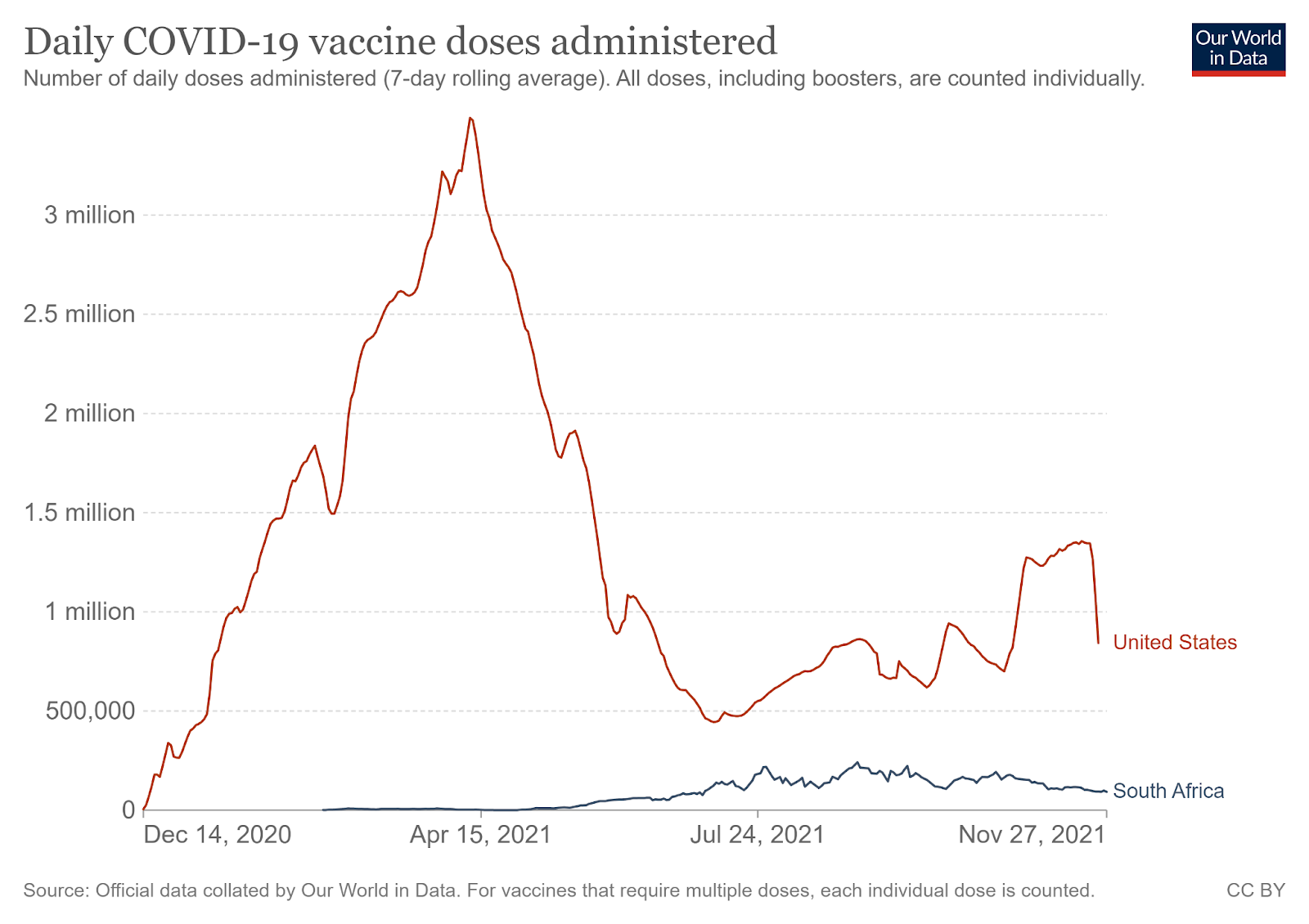 Effectiveness of current tests: The widely used PCR tests continue to detect infection, including infection with Omicron, as we have seen with other variants as well. Studies are ongoing to determine whether there is any impact on other types of tests, including rapid antigen detection tests. If Omicron is indeed more transmissible it would be expected to produce a higher viral load which would, in turn, make antigen testing even more accurate than it is already.

Effectiveness of current treatments:   There would be little reason to think that Omicron would not respond to treatments, of which we now have many. For those with early and symptomatic COVID-19 as well as risk factors for progression to severe disease, monoclonal antibodies delivered by IV infusion have significant benefit. Novel antiviral agents (molnupiravir and Paxlovid) are waiting in the wings for approval, although the more recent analysis of molnupiravir’s 5 day treatment shows a lowered effectiveness as compared to preliminary data. A study of Fluvoxamine (a medication given for depression and obsessive-compulsive disorder at 100mg given twice daily for 10 days) showed a reduction in COVID-19 mortality by 90% and a reduction in ICU admissions by 65%.

We have all been to this COVID rodeo before. Delta was a game-changer, for sure, with increased viral loads and high transmissibility leading even to spread among those already vaccinated. But vaccination has significantly reduced the risk of severe disease, hospitalization and deaths. It seems likely that Omicron is already responsible for community-based spread in various regions across the world, and the same will occur here. But vaccination, boosters, N95 masks, handwashing, frequent testing (preferably with cheaper rapid antigen tests that can lead to earlier detection than PCR), and ventilation will all reduce its individual and collective impact.