In this issue, what’s old is new again (unfortunately). We are going to revisit case rates in Los Angeles County and why Health Department counts are undoubtedly an underestimate. We will also discuss SARS-CoV-2 antibody levels and Evushield, an exciting new pre-COVID exposure preventive tool.
As Omicron waned in late January and early February, I regrettably predicted to patients that we would ‘have a good Spring.’ Some of my optimism was based on 2021’s experience when SARS-CoV-2 infection rates were very low (of course, mask mandates remained in place and the far less infectious Alpha variant was circulating). I also thought that given the significant number of Omicron cases in the community that subsequent case rates would remain low. That changed dramatically in our office during May during which we had 28 new COVID-19 cases, as compared to 4 in April
Case rates in the Country as a whole have shown a similar trajectory, although not quite as dramatic. Reaching a low of 5.8 new daily cases per 100,000 in mid-March, rates have have shown a steady climb upwards, and are now at 35.7 (note that viral containment is defined as under 1 new daily case per 100,000 population) 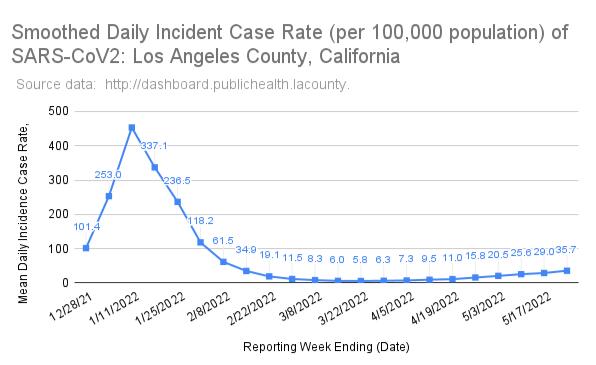 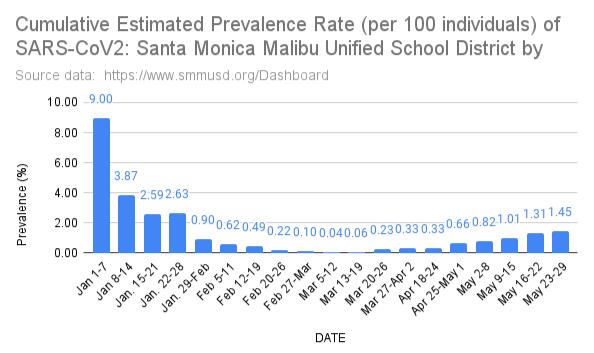 Based on prevalence rates seen in schools, we are currently looking at about 1.5% of the population returning with positive tests – now granted these are PCR tests so that number may reflect those who have recovered from the disease but are still testing positive. Extrapolating to Los Angeles County as a whole, we would estimate that about 150,000 positive tests would be reported – yet only 25,000 were over the same time period.

Looking for good news?  Mortality rates in Los Angeles County due to COVID-19 are the lowest they have been since the last week of March – 2020! 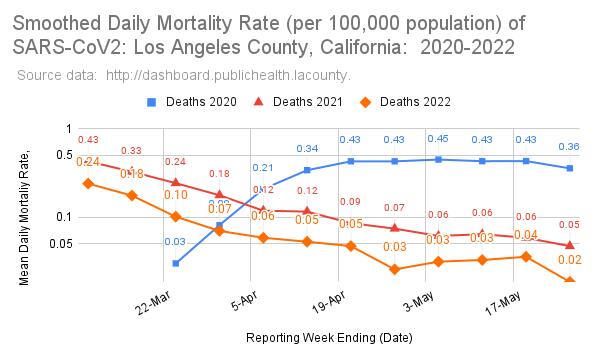 The first blog of the month was a bit of departure from the usual COVID-19 headlines, but was timely nevertheless, looking at the leaked Roe v. Wade SCOTUS decision document. When taken from a public health perspective, the absurdity of limiting abortion access becomes abundantly clear. The other two are more typical reading, with the third in the series being an attempt to quantify spike protein levels in a blood sample that would provide sufficient neutralizing antibodies to prevent COVID-19.

An Update of COVID-19 in Los Angeles County: https://drbretsky.com/18-may-2022-state-of-covid-in-la-county/

Surveillance: The ongoing systematic collection, analysis and interpretation of health data that are essential to the planning, implementation and evaluation of public health practice. This is generally divided into two categories, passive and active. There are representative examples of each in this newsletter. Passive surveillance (or reportable disease) is that collected by our local health department based on physician or laboratory reports. The COVID-19 case numbers summarized by LA County Health are based on passive surveillance as they do not seek out cases (and, in fact, specifically do not count home tests as valid cases). Active surveillance is illustrated by the SMMUSD data highlighted above. In such, active cases are sought out and reported nearly in real time. 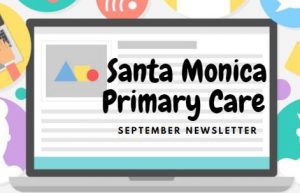 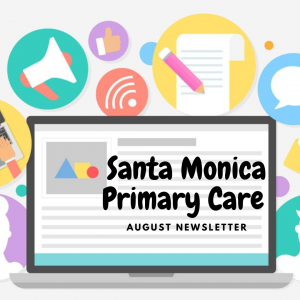